Whether it’s the Walking Dead, Game Of Thrones or Dawn of the Dead, Zombie-themed TV shows and movies have always been popular. If you’re a real money slots player and you’ve been craving that taste, we’ve got good news for you. Casino game developers have made many zombie-themed slots over time, so you’ll have plenty to choose from.

We had a look through the entire catalogue, and we’ve come up with our five favourites. If you’re looking to play on the reels with the undead creatures, here are our Top 5 zombie-themed real money slots.

Necromancer is the one of the latest cutting-edge real money slots from Evoplay Entertainment. The game does not look like a traditional slot as they’ve spent a lot of time to create an immersive, high-quality 3D game. When you fire up the game, you’ll see what looks like a mysterious courtyard where the Necromancer is practicing dark magic over a cauldron. Each time you “spin,” the creatures disappear into the earth and respawn. They’re lined up in rows and columns, so while it doesn’t look like the traditional reels, it still plays like a slot.

You can bet anywhere from 0.1 to 500 coins with each click, and as you move through the mummies, zombies, and ghouls. As a result, you can win as many as 15,000 tokens.

Every time you spin, the Necromancer looks like he’s casting a spell. As the daunting organ music plays, what you’re looking to hit is three or more Scatter symbols: the golden spiky or monster chest. When you see three or more, the Necromancer will fly up and flash his spellbook to you to indicate that you’ve earned five Free Spins. 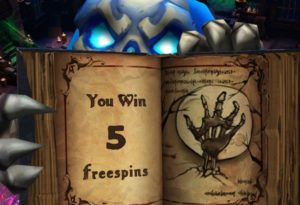 However, one thing to keep in mind with these real money slots is that these scatters only appear on the second, third, or fourth reels only. They also don’t appear during Respin or Free Spins, so you can’t reactivate or extend the Free Spin round while you’re in it.

Evoplay Entertainment has done a fantastic job with design as the characters are fully 3D.

They sway back and forth, jump up and down from time to time and react if you click on them. The animations for each spin are really cool too, as the characters are sent underground and then summoned back up with each spin. This is light years ahead of the basic three-reel real money slots.

What you’re looking to hit is the same characters in neighboring columns to win with this game. In total, there are 40 different paylines, so they have to line up for you. You can find more details inside the game by clicking on the “Paytable.”

In terms of the actual characters, this who you’ll encounter:

There are also two special symbols: